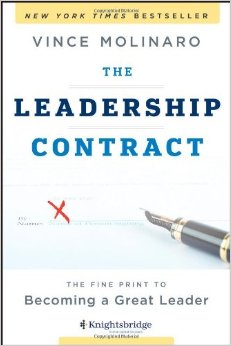 Vince Molarno recently published a book titled The Leadership Contract: the Fine Print to Becoming a Great Leader.  Molarno has built his career around the concepts of building healthy, productive and respectful organizations.

I’ll admit, I am not usually attracted to this type of leadership book yet this one has a concept that I find quite relevant to many leaders. Molarno draws the analogy between the “agree button” that we click on websites on a regular basis and being a leader. I found this concept intriguing because I’ve met three great leaders in the last month who were asked to “agree” to new responsibilities. They were encouraged to quickly agree to these new responsibilities without accessing their strengths, capacities, and current load.

Molarno argues that good leaders stop and think about what they are agreeing to before they take on new projects, new responsibilities, and even promotions. He gives examples of individuals who took time to pause and assess what a new project would mean to their personal and professional life.

I know a leader who was recently offered an extension to an interim position. When I asked her, “what did you agree to? ” Her response was, “what do you mean?”  I responded, “when you said you would continue as interim what did you agree to be doing for the next 9 months?”  We then continued to discuss where she needed time for personal reflection and professional inquiry before agreeing to continue on as the interim. Molarno would call this part of the leadership contract.

On a regular basis we hit the agree buttons on websites when we agree to an online purchase or membership. In leadership, Vince Molarno reminds us to always stop, reflect and think about what it is we are agreeing to do. This self checking around personal and professional balance is an invitation to say “yes”, “no”, or  “maybe later.”

Either way, pushing the pause button instead of the agree button during critical decision making moments feels like good advice for all leaders.