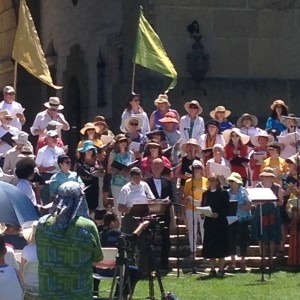 There is a bit of a myth that leaders always know the right thing to do because they have experience, knowledge, skills and positional authority. This myth is quickly shattered when a leader makes a mistake, miscommunicates, offends someone or totally misses the strategic mark. Mistakes happen. If it has not happened to you yet, rest assured it will. We are human. Nevertheless, what may not always happen is leaders asking for forgiveness and followers (colleagues, staff, etc.) granting forgiveness.

Furthermore, what happens when tradition, politics or other driving cultural norms forces a group of leaders to go down the wrong road and ends up causing harm? Harm to individuals, families, friends and strangers? Wise leaders know that the harm must stop and that it is a time for humility, vulnerability and forgiveness. It does and can happen.

On July 12, 2015, a group of faith leaders gathered in the Sunken Garden of the County of Santa Barbara Courthouse to celebrate but also stop harm. They and a group of over 250 people gathered for the event called Love. Period, the first ever interdenominational faith service for the LGBTQ community and it’s allies in Santa Barbara. We sat together hearing stories, music, prayers and reflections by different faith leaders in the Santa Barbara area. Over 20 faith communities gathered to support this event.

I was moved by the music, the stories of LGBTQ members turning away from their faiths because of judgment and the heartfelt goals of coming together as one through reconciliation. However, what was most powerful was a prayer of asking for forgiveness. In the heat of the July sun, leaders from all faith communities spoke as one and asked for forgiveness from the LGBTQ community, families and allies. They asked for forgiveness from times where they and their faith communities had not been welcoming, had been judging, had not offered sacraments in times of great joy and sadness, and had turned LGBTQ community members away. Their powerful words washed over me and I found myself with head bowed and tears coming to my eyes as the words of asking for forgiveness filled the air. It was one of the most powerful messages by a group of leaders I’d ever heard.

The power came from a place of deep humility, vulnerability and compassion. It came from a place of recognition of harm, desire to change the course of harm and a call for action to not only just ask for forgiveness but to act as a community of Love. Period. They asked all of us to stand up, come out as allies, and embrace the call to action of justice, equity and love of all.

The Supreme Court ruling on gay marriage was a moment of great celebration for all LGBTQ members and allies. Yet to me, this collective heartfelt plea for forgiveness with an equally soulful call to action was where the ground began to shift towards the awareness and power of love and justice. What can we as leaders learn from such collective courage to reset the course and begin anew and live out Martin Luther King’s call to “one beloved community”?

Let me know what you think about forgiveness. Contact Polly.