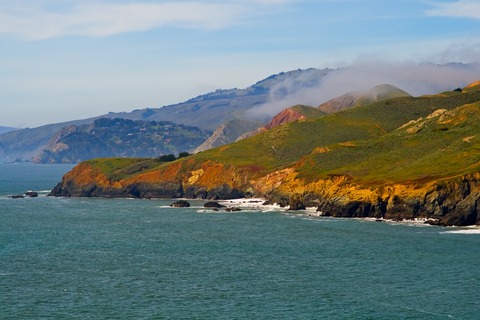 As a new resident of Marin County, I’ve been reading Saving the Marin-Sonoma Coast by L. Martin Griffin. This powerful book documents the land conservation battles that took place to protect Marin County’s Bolinas, Point Reyes and the Russian River areas. It was the intense focus, amazing strategy, and persistence of many people that prevented Marin County California from becoming a landscape of urban sprawl.

One of the shocking stories is about the mid 1960’s development called Marincello. This would have established a small city of 35,000 right across the Golden Gate Bridge. If development had happened, we would have been looking at a large metropolitan area in Marin County instead of the Marin Headlands of the Golden Gate National Recreation Area.

In a time when there are development pressures all over the world, the story of Marin is one that gives me hope. It reminds us of Margaret Mead’s quote…”Never doubt that a small group of committed citizens can change the world, indeed it is the only thing that ever has”.

As we hear news of Beijing’s red alert for air quality and watch the floods through the midwest, we are reminded of the fragility of our planet.  A study released this week reports as many as 58 million trees in California are suffering severe water loss. Governor Jerry Brown has declared a state of emergency and “the worst epidemic of tree mortality in modern history”.

As I stood under the towering Redwoods of Marin County today, I was struck by the vulnerability of these giants in the age of climate change and severe drought.  I wondered what I could do to become Mead’s engaged citizen.  We Californians eagerly await El Nino to bring rain and snow to restore our reservoirs.  However, perhaps what we need most of all is to be engaged, committed citizens standing united with the new Paris Agreement Climate resolution.